We leave Ribadeo following the main road signed to La Coruña and head of to the beach of "las catedrales" a bit of a detour from the camino, but completely worth visiting if you are in the area. It is one of the most spectacular geological formations in the Spanish coast line, the name "the cathedral" comes from the amazing natural cave and rock formations. Huge stacks sit amongst a series of caves tall enough to walk through at low tide. At high tide - the water rises some 4 metres - you are presented with a group of islands just offshore, topped with wild grasses, and alive with seabirds.

On the coast road we cycle past Rinlo, a small village by the sea, and the first of the " cetareas". These are man-made rockpools, in effect, or rather enhanced existing pools, where the tidal water comes in and is trapped by a number of locks along with lobsters, crabs and other shellfish.

It was originally invented at the turn of the 20th century by a woman that used to spend her summer holidays there (Cetareas are a good example of self sustaining food chains; man-made but enhancing what nature already provides, seaweed that grows around, and would otherwise clog up the pool, is used as natural fertiliser for the land. The local potatoes have an incredibly rich flavour!

Today we leave the coast and travel inland for the next few days until we get to Noia.

We head inward, crossing the main N-634 at Rato towards Devesa.

A line of dark hills, topped with even darker clouds block our way.

We Check the map: Monte Mondigo (569m), Togiza (838m), alto de Lagoa (also 838m). These will be our challenging companions for today and tomorrow. My left knee creaks.

An hour later we are near the top of Monte Mondigo and then drop down to the LU-133, turning off to Vilamartín Pequeño (little) to pick up the camino again. This is all forest around here and the air is rich.

We come out into farmland and a series of steep hills. The climb up to Vilamartín has us in bottom gear and off our seats, grunting and sweating to the top.

We're getting hungry and have been used to dropping in to cafes and bars along the coast.

For the first time we are in the middle of nowhere, and the last big-looking town turned out to be 5 houses and a chapel. My bag of dried figs and a handful of hazelnuts will not last very long. We start to eye each other suspiciously. There's no point in us both starving...

A farmer appears and tells us there's a bar in 2km. Great, except we've learnt that distance is both relative to hills between and usual mode of transport. 2km in a car turns out to be 6 or 7km by bike.

We cycle on for another 5km before finding a great little camino stop - La Curva, where the kind lady who runs it sends her husband out to the granary to get us chorizo and bread she's made. The taste is heavenly.

We are in a place not marked on my map. The previous two or three villages we've cycled through since Vilamartín weren't marked either.

The camino signs cut through woodland on dirt tracks again and we detour around local roads until we pick up a concreted part which leads to Lourenzá. We've somehow missed Vilanova.

Through the middle of Lourenzà and Mondoñedo is indicated right at 8km.

We wilfully ignore it, heading towards Pto de Santa Cruz on the LU-122 to Santo Tomé before turning right onto the LU-2083 signed to Lindin.

This is a long uphill climb on a narrow road through forest. We meet one car on the way and the driver seems genuinely surprised to see someone coming the other way.

At the top a farmer with a pitchfork slung over his shoulder greets us in broad Gallega. Not Spanish.

We pass under the new motorway bridge- still under construction- round the bend, and are presented with Mondoñedo sitting in the valley below us. The black sky breaks open and heavenly light shines down, the wet roofs glistening like gemstones.

You imagine previous travellers in earlier times at this point, the cathedral bright in the distance, and the overwhelming emotion and spiritual relief.

We freewheeled down into town and were directed by a couple of old ladies sitting in a doorway to the Seminary, where we found cheap, simple accommodation.

The doorkeeper sat in a small cubicle, just inside the massive old wooden entrance doors to the Seminary. He was slight, stooped and very quietly spoken man with thick glasses. He took ages to write out our forms, transcribing every detail from each passport before leading us into the quadrangle.

He showed us into a small lift, just big enough for the two of us with panniers. He indicated this wasn't a problem and told us to press 1st floor. As the door closed he stood, slightly stooped, and waited.

The lift doors opened again. He was still standing in the same spot. Oh, we thought- the lift didn't work - but no. This WAS the first floor!

How did he do that?? He calmly explained where the common room was, where breakfast was served, etc. he then indicated we should press the 3rd floor.

The same thing! There he was, in the same spot, not even breathing heavily! How on earth...?

As we left in the morning, we noticed a cabinet of silver cups and awards. Long distance running, cross country, marathons. We looked back at the doorkeeper's cubicle. I wonder if... 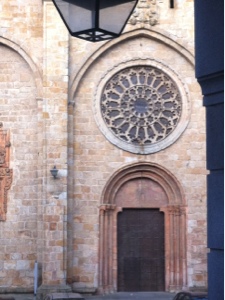 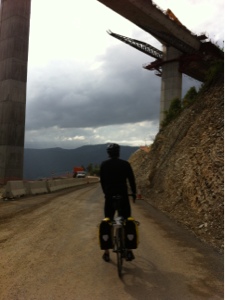 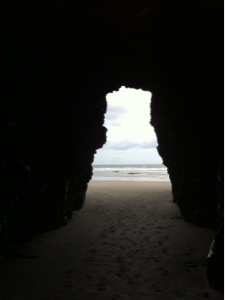 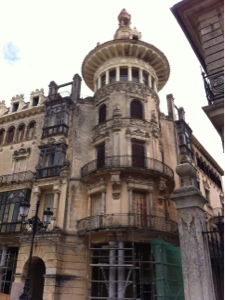 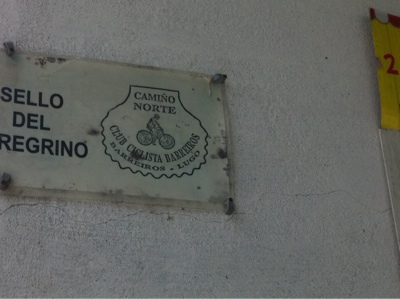 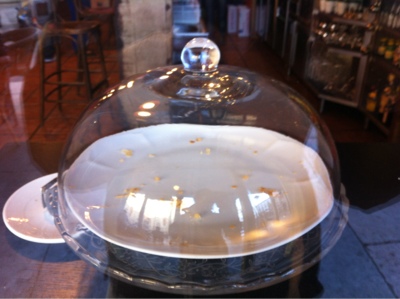 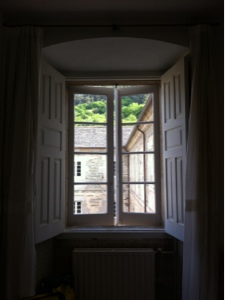 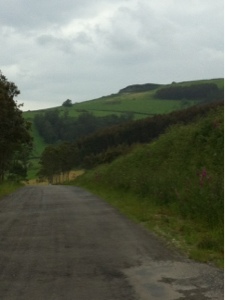 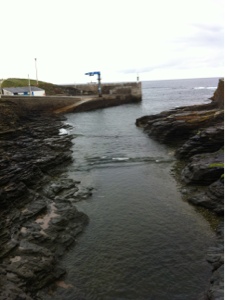 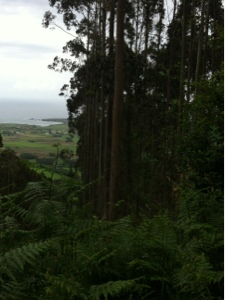 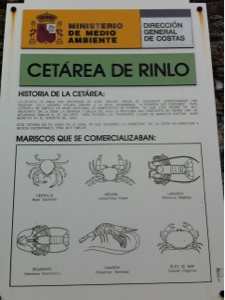 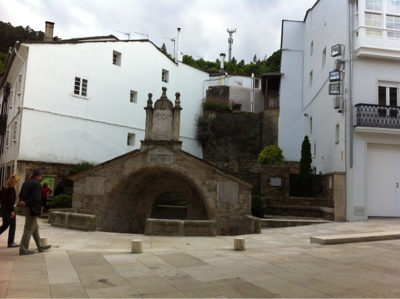 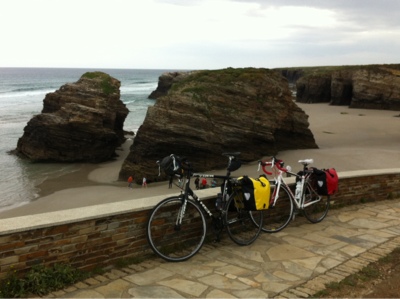 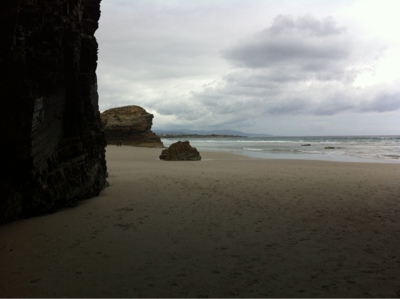 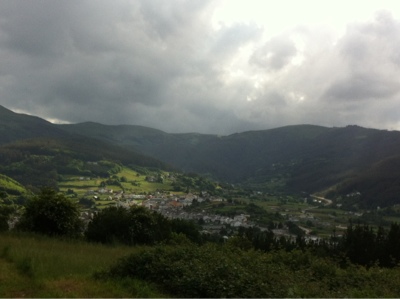 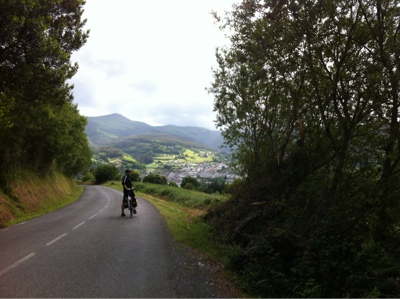 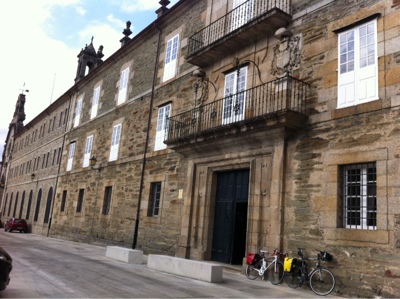 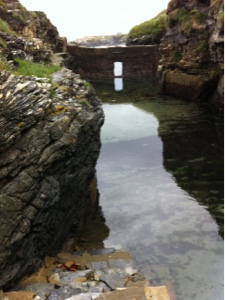 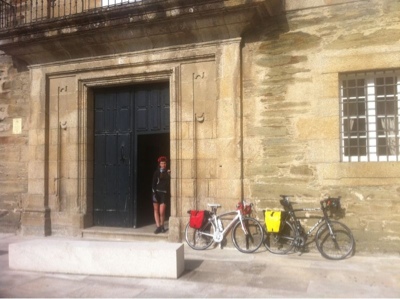