"You're going the wrong way!" we were told by a woman carrying a bale of hay as we cycled out of Mondoñedo.

This wasn't the first time. The difficulty with following the camino on a road bike is that there are bits you just can't do. They are mud paths, gravel or stone chippings, with steps, mud tracks made into ponds by tractor tyres and sudden steep climbs cutting off a road and over a hill.

The alternatives are often limited. Either the hard shoulder of a fast moving main road or a detour which can take you a few kilometres off route. Possibly in the wrong direction and up a different steep hill!

From main square we left the arches and cafe of O Rei de Tartas (the king of cakes, named after a local pastry chef with international recognition for his and now his son's creations over 4 decades) overlooking the Cathedral and up the hill, past the historic hospital, crossing the N-634 and joining the LU-P-3106. This is a winding local road which drops down to the river below before climbing for the next 7km.

This is slow work on a bike and wasn't helped in our case by the icy drizzle blowing horizontally into our faces and the strong headwind.

The old lady had told us at the bottom about our mistake. As the rain increased we were inclined to agree.

Alto de Lagoa sits at 838m and we passed less than 100m below its top before the road levelled off. Cattle grids every 2km slowed the next downhill pass. These enclosed an area of wild horses renowned in the county, as well as enormous granite boulders sitting in a steep woodland, brought and left by the last ice age. Most looked ready to roll down to the valley floor below.

We were now between two peaks and more protected from the winds. The pine forests swept down past us and filled the air with a strong clean scent.
As intermittent breaks in the cloud allowed the sun through, light picked out vivid green fronds of bracken and purple foxgloves.

A line of wind turbines gyrated their massive blades along the hill tops.

The road dipped down and we freewheeled into rolling fields of La Terra Cha, the flat table of higher altitude which we would cycle through until Santiago. From here peaks marked 800m and more are a little less daunting as you begin from 450-500m. Well, that's the theory.

The road joins the LU-0101 just after Espiñarco and this leads you into Gontan. The main N-634 is also the busy E-70 along this stretch.

After lunch in Abadín we followed the N-634 until the first camino sign led us away on it's older path.

Fuelled by a big plate of body-warming caldo gallego, traditional Galician vegetable soup, we got the courage to abandon the main road to follow the original camino, we turned onto the LU-113 after Abadin and then into roads not drawn by Michelin to follow the camino to Martiñan.

This, in retrospect, was a mistake. Within 5 minutes a puncture had us with upturned bike at the side of the road.

Rain in the afternoon, and the camino dirt tracks were very slippery. This would have been great fun on mountain bikes! As you follow the camino down you cycle inside tunnels of trees and you are completely surrounded by vegetation, so many different greens! But not good for the road bikes.

In Martiñan, after all the adventure we took the N-634 (the old National 6) and pedalled until Vilalba, where we stopped for coffee. The town is a mid size town, with the stepped main square built next to the main road. Probably a pretty town before cars took over, with its own Parador Hotel, and grand church.
Now, a scattering of attractive old buildings sit dwarfed by the ugly 60's and 70's blocks.

After Villalba we headed to Baamonde following the N-634, but got bored quickly and decided to take the road towards Campoverde, a bit more distance but more scenery. A local man provided directions towards Buriz, avoiding the hilly bits, but it turned out to be very hilly anyway.

Road signs were not clear or named places too small for Michelin and most of the places we cycled past were completely empty.

We followed our intuition, after a few ups and downs, and deadends it was a big relief to find the LU-170 from Buriz with a road sign to Parga (home, sweet home!), we pedalled all the way to the N-VI fuelled by energy cubes, to rejoin the camino at San Alberte.

We crossed the railway, gothic bridge, and cycled past the pretty church of San Alberte arriving at San Breixo for a fantastic homemade churasco dinner and salad from Coca's dad's allotment.

After a moment's thought we decided we needed a rest day on Sunday, cleaning clothes and fixing the bikes for the next leg to Santiago. 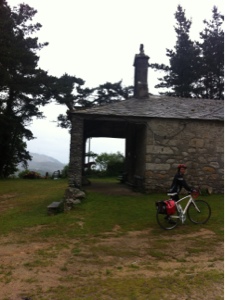 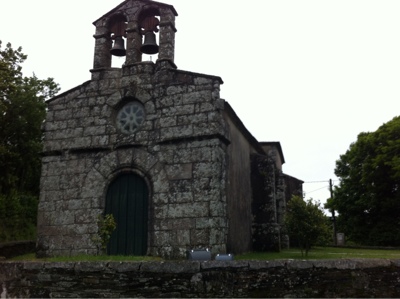 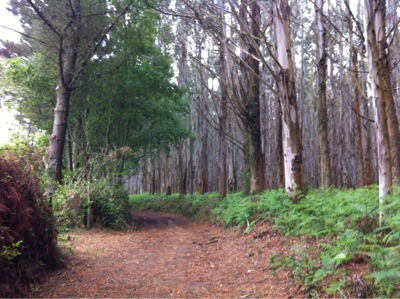 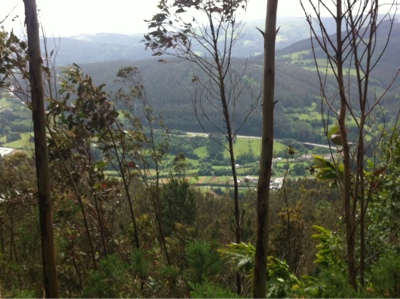 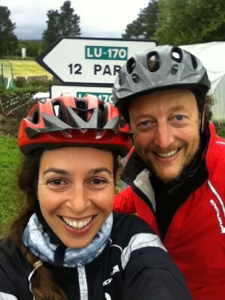 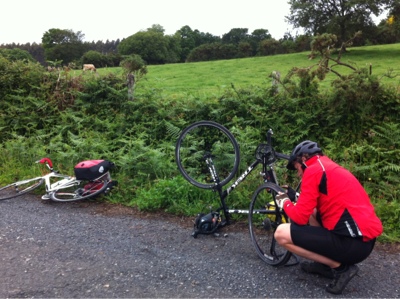 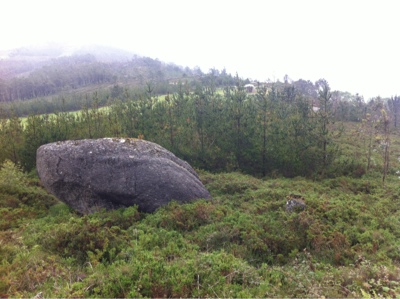 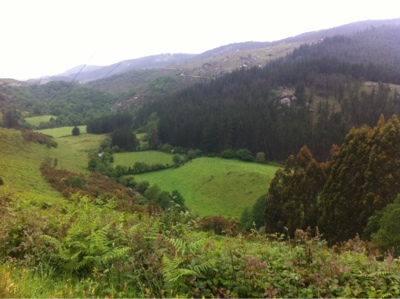 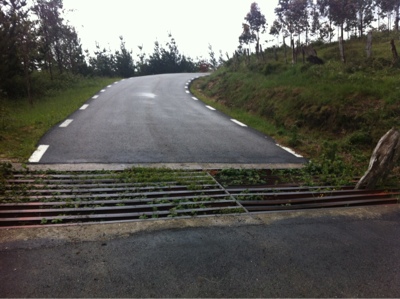 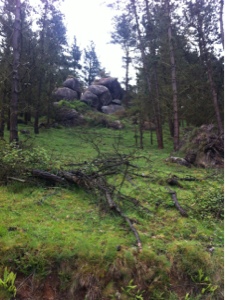 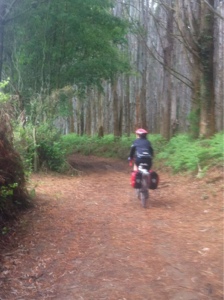 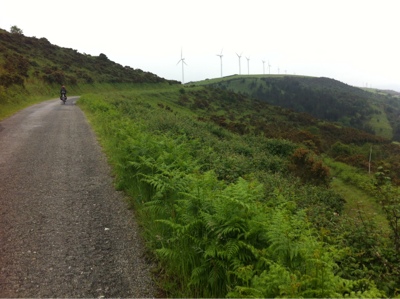 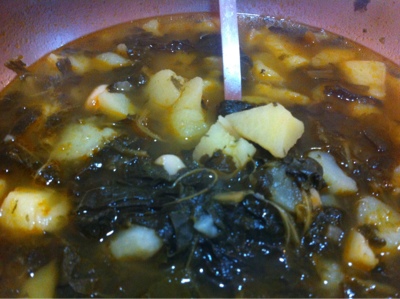 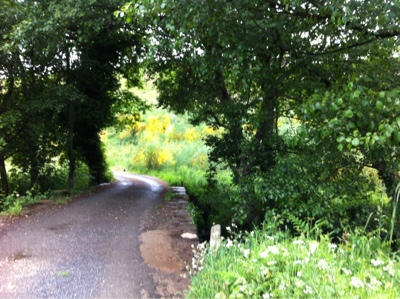 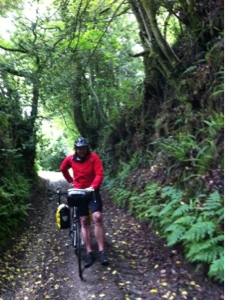 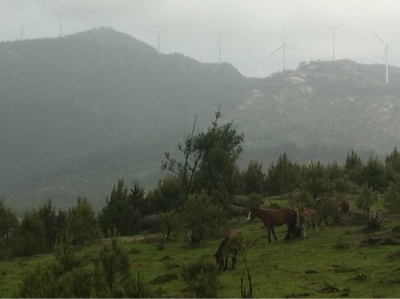 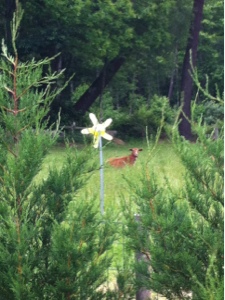 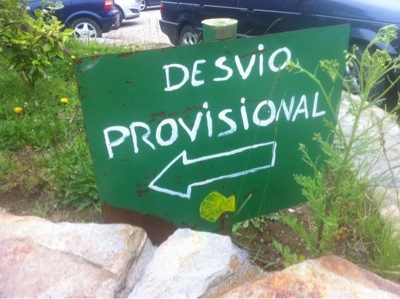 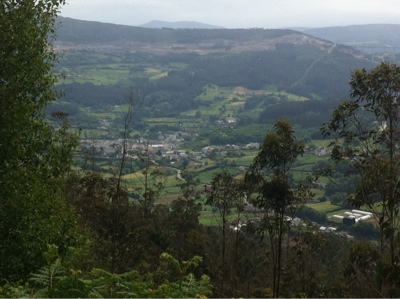 Email ThisBlogThis!Share to TwitterShare to FacebookShare to Pinterest
Labels: Cycle2Santago